Top 25 Things to do in London England

The Victoria and Albert Museum or V&A in South Kensington is said to be the world's greatest museum of art and design, with collections unrivalled in their scope and diversity. With 3000 years' worth of amazing artefacts from many of the world's richest cultures the Victoria and Albert Museum is a must see. The exhibits include ceramics, furniture, fashion, glass, jewellery, metalwork, photographs, sculpture, textiles and paintings. This vast array of interesting and well presented material tell an intriguing story of transformation through war, technology and economic advancement, social and political change.

The Victoria and Albert museum appears to prefer to be known as the V&A. Presumably like Kentucky Fried Chicken (KFC), it has worked out we like to abbr.

Trafalgar square is home to Nelson's Column, fountains, lions and few pigeons (now unfed and unloved so they have mostly gone!) Various events are staged in Trafalgar Square and you should follow the link below to see what's on while you are there. The main activity for most people is just to get the obligatory photograph of Nelson's Column and to sit by the fountains and watch the world go by.

Trafalgar Square was built to commemorate Admiral Lord Nelson and named after the Spanish Cape Trafalgar where his last battle was won. If you are fortunate enough to be in London in December you should see a huge Christmas Tree in the Square courtesy of the people's of Norway. The tree is a gift to the people of Britain for their role in their liberation of Norway at the end of the second world war. One of the magical sights of London is to see the giant tree lit up by hundreds of twinkling fairy lights, carol singers grouped around, while floodlights illuminate the sparkling water in the fountains of the square. It's a nice warm hearted gesture and full credit to the Norwegians for their continuing generosity. 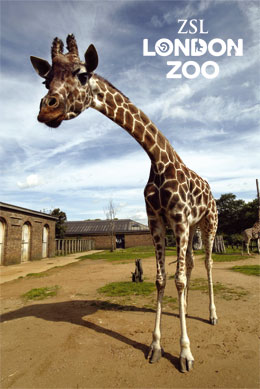 Stick your neck out at London Zoo

London Zoo in Regent's Park is one of the most famous of all London attractions and the only zoo in London where you can experience big animals such as elephants, rhinos and giraffes. With over 12,000 animals from 650 different species a visit to the Zoo can be exhausting so try to be selective about what you want to see. Popular attractions include Gorilla Kingdom, the Tropical Jungle Bird Pavilion, Butterfly Paradise, Rainforest Lookout and Nightzone with some nocturnal animals you may not have seen before.

For kids, London Zoo has the Children's Zoo theme down pat along with animal encounters and a few rides. Take your pick of the numerous animal feeds and talks. It pays to be early for feeding time at the Lion's Den.

London Zoo's new tropical "bird house" is a miniature rainforest in the Blackburn Pavilion home to (eventually) 50 species of exotic birds. Star of the show will be the tiny Amazilia hummingbirds which the zoo claims are the only ones in the UK. In common with most of the world's top zoos bars are on the way out. The birds will be free to poo wherever they want.

"It's a chance for people to get very close to birds, to share their environment, and there are some amazing birds in there. We hope visitors will be drawn in to the wonder of the avian world." says the zoo.

London's parks are all 'good' and you should at least visit one. The Regent's Park offers you open parkland and spectacular formal gardens, a large boating lake and open air theatre. Herons nest on the lake and you can see many other birds and waterfowl. The gardens are well maintained and lovely, the lake is pretty, the fields are open and the trees are magnificent. Who needs the English Countryside when you can take a stroll in Regents Park.

A canal boat will take you from Camden Market to Little Venice, via a stop for London Zoo (Regents Park) or vice a versa in less than an hour. If you intend to 'do the zoo' leave yourself plenty of time. You may get a little spooked but not stuck in the dark 250 metres long Maida Vale Tunnel, you might ponder at the ridiculous cost of housing by Regents Park and you will see poet and play write Robert Browning's island Brownings Island. 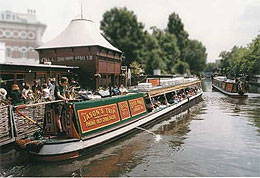 Jason’s Canal Boat Trip takes you on a leisurely trip along the tranquil canals giving you a fresh, unusual view of London. You can choose a one-way journey to Camden Lock or a full 1hr 30 mins round trip along Regent’s Canal. These original London canal boats travel through Regent’s Park offering one of the best views of London Zoo. The tour ends in London’s Camden Lock, site of the famous weekend market and features live historical commentary from a trained enthusiast.