Top 35 Things to do in London England

You don't need to be a scientist to work out that the Science Museum is a great "thing to do" whilst you are in London. The hardware on display here is impressive to say the least. No where else will you find such historically important examples of technology advancement. From Stephenson's Rocket to the Apollo 10 command module the Science Museum has the hardware to inform and entertain. It doesn't just stop at the hardware. You can catch a huge 3D movie or enjoy the thrills of a special effects simulator. The Science Museum is stuffed full of technology from the past, present and future over seven glorious floors of discovery and adventure.

From an educational prospective the Science Museum gets a gold star. Here your children can experience science in a positive, fun filled manner with carefully designed hands-on interactive exhibits. Entry into the Science Museum is free of charge except for IMAX 3D Cinema, the simulators and some of the special exhibitions.

St James Park is at the very heart of London. Often used for ceremonial and state occasions, the Park is a fantastic setting for pomp and splendour. St James is much loved by Londoners and a popular spot to unwind and have lunch. You can almost imagine the Queen taking her corgis for a walk, stopping to scoop up the dog poo into a plastic bag..well maybe not but it is close enough to Buckingham Palace to see the Palace Guards march down the Mall in order to get changed. Look out for the 124 foot high column of the Duke of York by the steps leading into the Park. The Duke of York was immortalised in a well known song:

"The good old Duke of York. He had 10,000 men. He marched them up to the top of the hill then he marched them down again". The Duke was not well known as an overachiever in battle.

Feeding the ducks is a bit of a tradition at St James Park. So much so in fact it is worth getting there early on blue sky days as supply can easily outstrip demand.

St James’s Palace was built between 1531 and 1536 on a site that once occupied the Hospital of St James, a former leper hospital dedicated to Saint James the Less. The distinctive red brick Tudor style palace has a rather tragic royal past. Perhaps reflecting the sites past life. Both Mary I and Henry VIII's illegitimate son died at the Palace and Charles I spent his last night at St James's before his execution. It is perhaps unsurprising that no sovereign has resided at St James for almost two centuries.

A product of a past empire the British Museum contains much that is ancient and perhaps reflective of a modern Britain in that many of the exhibits are not originally from these shores. The famous former Reading Room is now at the heart of the restored "Great Court" an impressive covered public square. Apart from the ex Reading Room you'll find the museum shops, restaurants and education facilities.

For those who need a mummy, would like to visit Egypt or have an interest in Egypt head straight for Egyptology. You can easily spend all your time there so don't allow yourself to be side tracked.

At times, the museum strains to cope with the multitude of visitors. The lack of an entrance fee into the museum is perhaps a cause of some of its problems. Well worth visiting but my advice is to commence your visit with the exhibits you most want to see. 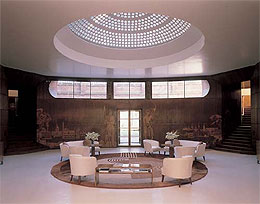 A unique and spectacular art deco house. One of the things you will be impressed by is Eltham Palace's massive hammerbeam roof built over 500 years ago. You will find some remains from the sites past life as a medieval palace in its beautifully maintained garden.

Eltham Palace is an impressive historical site that has been linked with a distinguished line of Royal figures since its construction in the 1300s. For hundreds of years it was a key residence for the monarchy, even housing a young Henry VIII. By the 1630s, the palace had passed into new ownership and continued to change hands until Civil War when it was used as a barn.

This evocative London palace has a fascinating history – not only is it famous for housing Royalty but (having been bought by Stephen Courtauld in the 1930s) it was partially converted into an excellent example of an Art Deco house. Few London palaces can boast such a varied past.

Free Entry with the London Pass