Top 50 Things to do in London England

Greenwich Park is famous for being bisected by the Greenwich meridian - the line to which time across the globe is referenced. Astride the meridian and feel the world at your feet.

As well as offering large formal parklands, Greenwich Park has a 'wilderness' side to it, an area enclosed for deer. Several historic buildings are in the park, including the Old Royal Observatory, the Royal Naval College, the National Maritime Museum and the Queen's House.

The Cutty Sark was a great London attraction and must do thing if you were in Greenwich then it was sadly burnt down and since rebuilt. The Cutty Sark was a beautiful ship and well worth visiting. No doubt it will be bigger and better than ever before.

The British Library is widely regarded as being one of the world's leading resource centres. It's 12 million volumes is enough to send most librarians weak at the knees. The public exhibition rooms contain the Magna Carta, Shakespeare's first folio, Nelson's log books, Scott's Antarctic Journals, Anglo-Saxon Chronicle, Gutenberg Bible and the Lindisfarne Gospels.

Leicester Square derives its name from a former resident, the Earl of Leicester, who used to live on the north side of the Square. These days, Leicester Square is busy with people looking to see a show or movie. Cheap(er) tickets should be available in the box on the square like the 'tkts' booth in New York.

William Shakespeare resides in the middle of the Leicester Square with his trusty dolphins(?). The Square has four busts, naturally, Sir Isaac Newton, Sir Joshua Reynolds (who used to reside in the Earl's house), John Hunter and William Hogarth. I don't know why there aren't any female busts. You'll also find Charlie Chaplin and the distances to former members of the British Empire inscribed on the pavement. 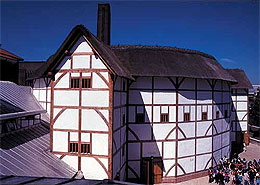 Be upstanding for a Shakespearian experience of the original kind at the reconstructed globe theatre from May through to September.

You will venture back in time with a visit to this spectacular theatre. Situated on London’s Bankside, Shakespeare's Globe Theatre is a faithful reconstruction of the original Globe, first built in 1599. The Globe perfectly evokes the atmosphere of Elizabethan London. If you join a tour, resident storytellers will introduce you to all aspects of the Globe, historical and contemporary, including Sam Wannamaker's epic struggle to recreate the theatre.

Time waits for no man so why mess about, do the river at 30 knots in an inflatable boat. This isn’t a cruise, this isn’t a photo op, this is full-on adrenalin charged fun.

“What a fantastic trip, I loved it”“Until you have taken the river in this boat, you probably haven't lived” “This is brilliant, absolutely brilliant”“Kids are not usually keen on sightseeing, they’ll no doubt change tune if you offer them a London RIB Voyage”“They're fast, they're slick, they're comfortable and the Big New Thing on the Thames”“A brilliant introduction to London for visitors”