Top 65 Things to do in London England

The bright and breezy London Dungeon makes for a pleasant day out with your granny (not!). If you love your horror movies this is for you.

Be afraid, be very afraid, well more entertained really but you gotta go with the flow of bodily fluids. Live actors, dead things, shows, rides and special effects will make you smile, if that's what you are in to. Everything that you see is based on real reconstructed and reinterpreted historical events that may have occurred. Jack the Ripper, Great Fire of London, torture, plague, joy joy how could you not go. 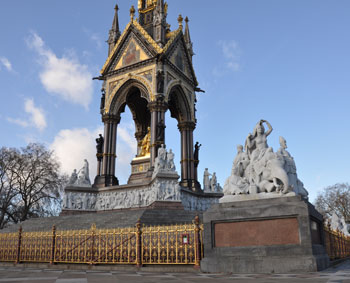 You'll find the the Albert Memorial in Kensington Gardens directly to the north of the Royal Albert Hall. It was built to commemorate Prince Albert, Queen Victoria's husband, who sadly died of typhoid in 1861. The memorial is designed in a Gothic style with an ornate canopy or pavilion containing a statue of Albert facing south. The memorial was opened in 1872, it is 176 feet tall and took over ten years to complete

The centerpiece of the Memorial is a seated figure of Prince Albert. Following restoration it has been covered in gold leaf. For eighty years the statue was smothered in black paint. The central part of the Albert Memorial depicts 169 composers, architects, poets, painters, and sculptors. The musicians and poets were placed on the south side, with painters on the east side, sculptors on the west side, and the architects have a northern aspect.

The Sea Life London Aquarium is home to one of Europe's largest collections of global marine life and the jewel in the crown of the 28 Sea Life attractions in the UK and Europe. Situated in the heart of London, the experience takes visitors on an immersive and interactive journey along the Great Oceanic Conveyor. 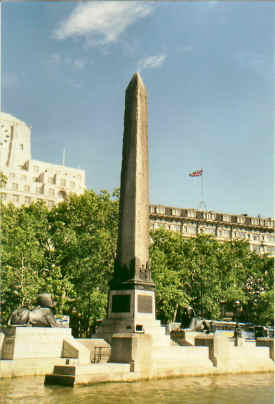 Cleopatra's Needle is a 3,500 year old Egyptian obelisk. It is one of the oldest monuments in London. Its was acquired by the Victorians from the Egyptians in 1878 to commemorate the British victory over Napoleon, sixty-three years earlier. Cleopatra's Needle was originally made in Egypt for the Pharaoh Thotmes III in 1475 BC. Its name is derived from its original location Alexandria, the royal city of Cleopatra.

The Victorians took the rulers of the waves literally and decided they would build a very special ship named Cleopatra to bring the Egyptian obelisk to London.

A steam-ship called Olga was commissioned to tow Cleopatra with the obelisk inside of her from Alexandria to London. Having made it all the way to just off the Bay of Biscay in France Cleopatra run into trouble. Due to the bad weather it looked like she would sink. In the finest traditions of seamanship the Olga sent six volunteers in a boat to rescue Cleopatra's crew. Unfortunately the boat was swamped by huge waves and the volunteers drowned.

Eventually the Olga was able to rescue Cleopatra's crew and having done so cut the towrope. Cleopatra was adrift in storming seas. With no crew she looked doomed. Had Napoleon had his revenge?

Four days passed with no sign of the lost ship until finally, on the fifth day, Cleopatra was discovered undamaged and still afloat. In January 1878 she was towed up the River Thames to loud cheers and artillery fire. It was as if the Battle of Trafalgar had been won for a second time.

Four plaques mounted round the base of the Obelisk give a brief history of the 'needle' and its difficult journey to London. The men who died are commemorated on one of then. As for poor old Cleopatra, she was scraped! Maybe the monument is more about the ship that wouldn't sink and the men that tried to save her crew than anything else.

The London Wall was originally built by the Romans to defend Londinium around AD200. The 6m high wall extended for about 2 miles with gateways at road intersections. It also incorporated a fort. The was wall was subsequently intended to run along side the River Thames in the 4th century. The wall continued to be used as a fortification for over a thousand years until the 18th and 19th centuries. During this time large portions of the London Wall were recycled into other structures around the city. The Germans removed most of what remained during the Blitz in World War Two. Some of the large piles of rubble that you may have seen on the old black and white news reels of the blitz were in fact remnants of the London Wall.

Despite the recycling and destruction some of the wall thankfully did survive. The easiest and most accessible portion stands just outside Tower Hill tube station near the Tower of London. You will find a replica statue of the Emperor Trajan standing directly in front of it. For more details just follow link below