Top 75 Things to do in London England

Oxford Street is one of the most famous shopping streets in Europe and consequently one of its busiest. Oxford Street stretches out for about a mile and a half but it may seem longer as you dodge your way through the crowds. It is best known for the big department stores of Selfridges, John Lewis and Debenhams located between Marble Arch and Oxford Circus. If that doesn't interest you there are many more big-name multinationals keen to get to know your credit or charge card. From Oxford Circus to Tottenham Court Road is just as 'good' but on a smaller scale. If you if have the money Oxford Street has a shop you can spend it in.

If you know your partner will groan at the thought of a shopping trip Tottenham Court Road might be able to help. It is packed with electronics shops. He/she/you could explore the latest gadgets whilst he/she/you can explore the latest fashions. One partner starts at Marble Arch the other starts at Tottenham Court Road Tube station. Make sure of course you both have a mobile / cell phone.

One final tip, more of a warning really - pickpockets operate like sharks in the sea of people that is often Oxford Street. Keep your possessions well out of everyone else's reach.

Most Oxford Street shops are open 10am until 6 or 7pm. Some open Sunday 12 to 6pm with late nights on Thursday. 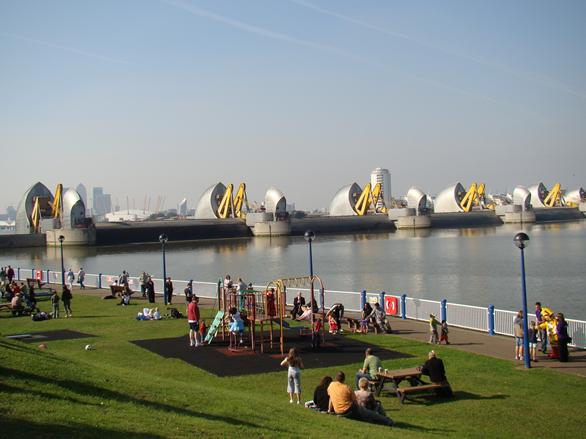 The world's largest moveable flood barrier protects London from the increasing risk of tidal flooding from the River Thames. The river that gave birth to London has the potential to devastate the city. The Thames Barrier has been described as the eighth wonder of the world. Whilst this is perhaps a little over the top few would question the Barrier's impressive engineering.

The high water level at London Bridge has risen just shy of a metre over the last 100 years. The melting of the polar ice caps and global warming are cited as the cause. It is the Barrier's job is to protect London from tidal surges. These originate in the North Atlantic and rarely get anywhere near the River Thames. Occasionally, however, they do. Millions of tons of sea water heads west up the River Thames. One and a quarter million people, billions of pounds of property and infrastructure and capital's international reputation are at stake. The Thames Barrier is only thing between London and disaster. Thankfully our Barrier hero stands ready to defend and protect. In our humble estimation, the Thames Barrier is at least the 72nd wonder of the world, well London anyway.

At 350 acres Hyde Park is one of London's most extensive green landscape. Hyde Park has numerous cafes and restaurants to relax in, a children's playground to play in and the Lookout, an education centre where children learn about nature and wildlife.

Deckchairs are widely available in the park from April to September during fair weather daylight hours. A visit to Hyde Park is not complete without a visit to Speaker's Corner to hear the people speak. Then there is alot of grass. Grass for walking, jogging, lying, snoozing, smooching and looking up from. The grass is just great and stretches from Buck Palace to Oxford Street.

30 St Mary Axe, also known as the Gherkin, is a skyscraper in London's main financial district, the City of London. The Gherkin was completed in December 2003 and opened on 28 April 2004. It is 180 metres (591 ft) tall, with 40 floors. Its erection symbolised the start of a new high-rise construction boom in London.

Do you remember where you were when Diana's life ended so tragically? It was one of those moments that deeply effected a vast number of people. The public expressions of grief in England were as widely expressed as they were deeply felt. With the extensive media coverage of her life many people felt like they knew her and truly felt the loss.

Unfortunately, unlike the life it seeks to commemorate, Diana's memorial is unloved by many of her ex-subjects. This probably has more to do with the great affection in which Diana was held than anything else. Nothing was ever going to be good enough. The Memorial is more of a stream than a fountain flowing over different surfaces in various ways to reflect the complexity of Diana's life.