Top 90 Things to do in London England

Sherlock Holmes and Doctor John H. Watson presumably would turn in their graves if they had them. You don’t need to be a Sherlock to work out that this is a myth.

I jest, of course its all true, visit The World's Most Famous address - 221b BAKER STREET - the Official Home of Sherlock Holmes! Says the website –but hang on –he doesn’t exist – this was a fictional character! If you are a fan and well read you would know he does exist. Certainly the Sherlock Holmes had substance to it so let's move on to 221b Baker Street.

Sherlock Holmes and Doctor John H. Watson lived happily together, nod, nod, wink, wink, say no more at 221b Baker Street between 1881-1904, the house was last used as a lodging house in 1936 and the famous 1st floor study overlooking Baker Street is still faithfully maintained as it was kept in Victorian Times.

Stonehenge dates back to 3000 BC. The latest upgrade was a mere 3500 years ago. Much is known about how it was built but the why is more of a mystery. Apart from being an obvious landing site for UFOs, druid festivals, summer solstices, BBQs and pajama parties no one really knows. Archaeological evidence found by the Stonehenge Riverside Project in 2008 suggests that Stonehenge served as a burial ground. Cremated remains found on the site indicate burials from as early as 3000 BC. An opposite theory is that it is more to do with fertility with phallic shadows stretching across the ground towards the centre of the stones. An older theory was that it was used as a place of healing. So have a look around and see what you think. Maybe you can unlock the secrets of Stonehenge.

It would be great if Stonehenge was tucked away in a quiet corner of England but it isn’t. Probably issues with planning permission. Anyway, the A303 provides an interesting contrast between the modern and ancient but more importantly makes Stonehenge easy to get to. It should take just over two hours to drive out to Stonehenge from central London.

In 2002 a public poll voted Stonehenge as one of the Seven Wonders of Britain, alongside Big Ben, the Eden Project (Cornwall), Hadrian's Wall (Scotland), the London Eye, Windsor Castle, and York Minster.

The colourful floating carnival takes place in September on the Thames along a 22-mile course from Richmond to Greenwich, with more than 200 floaty things from around the world’s wet spots.

A good way to see the race is aboard the Passenger Boat. It takes its spectators along the course as far as Hammersmith Bridge before anchoring up and waiting until most of the race boats have passed. Then the passenger boat continues to follow the race around until you have seen the vast majority of the competing boats two or three times. You can disembark and enjoy a stroll upriver to join the crowds around the Great River Race bar or, if you prefer, stay on board and take the return journey back to central London. There is a licensed bar onboard so you can have a drink whilst you enjoy the spectacle.

Your trip will last approximately 3.5 hours. There will be a return to Westminster Pier leaving the finish at 17:45 hours. 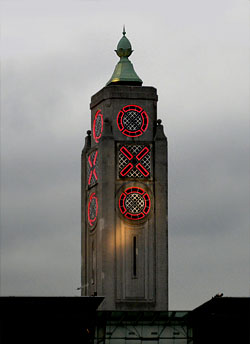 The Oxo Tower is a landmark building on the Southbank of the Thames between Waterloo and Blackfriars Bridge. It has a "OXO" symbol clearly visible towards the top of the tower (OXO is the name of a stock cube). The eighth floor contains a public viewing gallery and a restaurant. Beneath that are flats. Beneath them are arts and crafts shops on the ground and first floors.

The Oxo Tower was originally a power station. It was partially demolished and subsequently acquired by the manufacturers of Oxo beef stock cubes. The company wanted to build a tower to include illuminated signs advertising the OXO brand. They were allowed to build the tower but permission to advertise was withheld. Consequently the company built the tower with four sets of three vertically-aligned windows, each of which just happened to be in the shapes of a circle, a cross and a circle. But this is not advertising of course, just an amazing coincidence.. 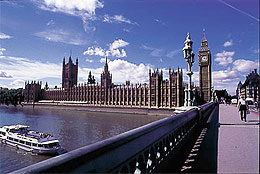 Good spot to take a picture of the House of Parliament and Big Ben.