Top 55 Things to do in London England 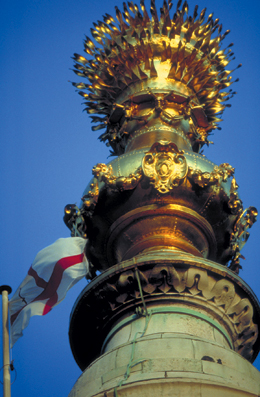 The Great Fire of London was one of the most devastating events in London's history. Sir Christopher Wren designed The Monument in commemoration of this terrible time. The Monument is one of the best ways to view London. The Monument's standing of 202 feet high stands 202 feet from the spot on pudding lane where the great fire is believed to have started. Amazingly the Monument is the oldest stone column in the world. All visitors who climb the 311 steps are awarded a certificate to prove that they made it to the top.

The Monument had a wash and spring clean in March 2009. In particular the orb that crowns the monument never looked so good.

A London Pass will get you to the top of the Monument and give you the opportunity to learn all about the Great Fire of London for free.

Whitehall is dominated by Government buildings and departments stretching from Parliament Square and the Houses of Parliament down to Trafalgar Square. Sights to watch out for include:

Take a walk down Whitehall

The charming Kensington Gardens incorporates Kensington Place, the home of the late Diana, Princess of Wales and the Albert Memorial. The gardens consist of the Sunken Garden, the Long Water and the Round Pond (a favorite with remote controlled boat enthusiasts). The Sunken Garden is beautifully based upon the Tudor garden in Hampton Court.

Kensington Gardens is a dream if you are a kid. The bronze statue of Peter Pan is a favourite but the Diana memorial playground is a magnet. The modern playground is one of three all themed around Peter Pan.

Another attraction within the park is the Serpentine Gallery, a modern art gallery housed in a former tea pavilion. The park's statues include 'Physical Energy' by George Frederick Watts (1908), 'Rima' by Jacob Epstein (1925) and 'Arch' by Henry Moore (1979). 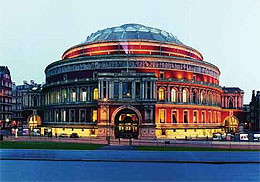 The Royal Albert Hall is one of London's most prestigious historic buildings. With over 150,000 performances under its belt the Albert Hall has heard it all before. Yet nothing has ever created more emotional celebratory high spirits as the world famous Night at the Proms.

Highly trained and knowledgeable guides lead tours of the Royal Albert Hall giving you the inside story of both front-of-house and behind-the-scenes at this magnificent historic building.

With a London Pass you get free entry to tours of the beautiful Royal Albert Hall.

The London Branch of the Royal Air Force Museum displays famous aircraft from WW1 to the current day. Opened in 1972 the Royal Air Force Museum's 'London' site is situated on the historic site of Hendon's Aerodrome in Colindale close to London. With almost 100 aircraft from around the world to see you may need more than a day to get through it all.

Included in the line up are some very early aircraft designs through to the latest modern day jets and military aircraft. Free admission plus free interactive and fun activities, including 3D Cinema.