Top 110 Things to do in London England

Canary Wharf Tower is the tall block shaped building with flashing light on top. Canary Wharf Tower is London's tallest building and you should be able see it from most parts of London, particularly in the east. In many ways this 50 storey office block is symbolic of a functional, practical London.

Museum in Docklands tells us about the history of the Port of London from Roman occupation until Wednesday last week.

As parts of both countries have changed hands, the languages have mixed and more recently close allies and commercial partners. France and Britain are both close physically and historically. Talk to the locals though and you'll probably hear a different story.

Walk with an old dinosaur? Imagine if you could, surely it would be more of a run, climb or hide.

There’s a Dinosaur in the Palace!

This is a great place to take your little people. Situated in Regents Street it is easy to include this as a treat after dragging the kids through something more educational or after Oxford Street shopping.

It looked destined to be just a decaying zoo but has Chessington Zoo was reborn into Chessington World of Adventures and grew into Britain's first genuine theme park. It has had its ups and downs but is now looking at a major relaunch in 2010 with a new land, rides, Zoo, Sea Life Centre and Safari Themed Hotel.

The park is located in south-west London just 12 miles from Central London, close to the A3 and M25 (junction 9 or 10). The park has a range of attractions from the new Kobra thrill ride in Wild Asia, to family-oriented rides such as the Bubbleworks. It also has over 1,000 animals, many of which can be seen from an elevated monorail around the Zoo.

With magnificent interiors of elaborate plasterwork and carved timber the Georgian town palace of Mansion House is worth seeing if you can. Mansion House is only open by appointment. Group applications should be made in writing to the Principal Assistant, Mansion House London EC4N 8BH

Carnaby Street was renown for Mods and music bars such as the 'Roaring Twenties'. It was also frequented by such unknown bands as the The Beatles, Small Faces, and The Rolling Stones. Carnaby Street was a cool place to hang out man.

Yes I know it’s not in London but it is close. One of the great things about London is its proximity to everywhere. Stratford Upon Avon is Woody’s old stamping ground. All things Shakespeare. This is a Mecca for Woody’s legions of fans and a great excuse to see some green and pleasant land. 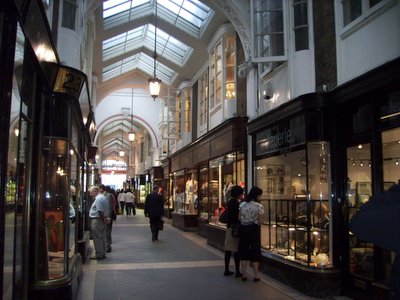 The arcade consists of 40 shops selling clothing, footwear and accessories, art, antiques but is most famous for its jewelry and antique silver. Needless to say, the Burlington Arcade is a wonderful place to window shop.