Top 20 Things to do in London England 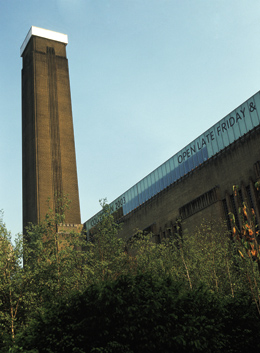 Tate Modern is the national gallery of international modern art for Britain sharing some of the lime light with Tate Britain its older sibling. The Tate Modern was born into the disused Bankside Power Station in North Southwark at the turn of the century. It is hard to think of a more adapt use for such a fine old landmark and a more appropriate location for such a powerful art gallery.

The Tate Modern covers all its bases from Fauvism onwards. Picasso and Matisse, Dali, Ernst and Mirò are well represented. Their work is complimented by Pollock, Naum Gabo and Giacometti and the Seagram Murals of Rothko. The Tate Modern's youthfulness is its strength. It provides a wide range of material upon which to feast for your eyeball. Enjoy the in-your-face Pop art including works of Lichtenstein and Warhol. Take a deeper breath and allow your mind meander through the fine Minimal and Conceptual works of art on display.

If you begin to feel a little emotional or some sensory overload you can escape on to London’s Southbank and take a walk down to the Thames and the Millennium Footbridge. Admission to the Tate Modern is free so you can easily visit more than once. A London Pass will earn you a free audio-guide.

If you really want to get on top and digest what you've seen you can. The Tate Modern possesses a restaurant. Its on the roof. The views are just panoramic.

The Tate Boat is great idea of getting you from one Tate Gallery to the other. That's Tate Modern to Tate Britain or vice versa in one easy trip. You even get a stop at the London Eye thrown in case you need to get over the Capital. Any trip on the river has an almost guaranteed good idea stamp of approval on it. A Tate to Tate cruise is Tateamount to brilliant.

The Tate Boat - the details

We shall fight them in dark rooms underground - Cabinet War Rooms

The Churchill Museum covers all ninety years of Winston Churchill’s life, divided into five chapters: his early year’s as British Prime Minister starting May 1940; his later years; his childhood; his early political career and the period famously known as the ‘Gathering Storm’.

The Churchill Museum uses cutting edge technology and unique media displays to chart the life of Winston Churchill, including a fifteen metre long ‘Lifeline’, which visitors can touch to access a digital ‘filing cabinet’ of Churchill’s life, categorised by time.

Winston's bed and bedside cigar, sketches of Hitler, maps, taped phone conversations of Churchill talking to FDR and old furniture. An historical smorgasbord. This is for real. History on a knife edge. Great stuff.

The Cabinet War Rooms are like a time capsule - buried and forgotten for sixty years. You can almost feel what it must have been like. Fighting, not for political ideals or oil, but for a nation's very survival. A landmark in time. The War Rooms was where much of the action was orchestrated.

I've tended to avoid the Imperial War Museum in the past on a false assumption that it glorifies war. A recent exhibit included the following Rudyard Kipling quote:

"If they ask you why he died, tell them our fathers lied"

There is much to see at the Imperial War and generally, it won't cost you a penny. If you are a history buff time will pass pretty quickly so make sure you don't miss the rest of Londinium.

The museum intelligently presents its subject matter with many thought provoking themes and exhibits. The past can come crashing down on you like a runaway train. There is nothing new. We just recycle. The blitz families of London became experts in recycling and perhaps demonstrate the true meaning of doing it tough. See to what it means to really stretch the family budget.

The museums impressive artillery protects the entrance a mere two stops from Westminster tube and belies a more subtle and thought provoking interior.

Walk along it, over it or ride on it. The River Thames gave birth to London so pay it its due and spend some quality time together. The River Thames has served London as an economic resource, a water highway, a boundary, a fresh water source, also a source of food and more recently a leisure facility. In 1929 John Burns MP famously described the River Thames as "..liquid history".

A decent river cruise should give you Tower of London, Tower Bridge, St. Pauls, the Globe Theatre, the London Eye, the Houses of Parliament and Big Ben. If you go on a River Thames cruise ask them, if you can, to point out London Beach by Tower Bridge. This is where the locals used to go for a holiday. Now many locals own properties in sunnier climes on the continent. However, the River Thames Beach is still celebrated.

If walking I suggest you do so from the south side as most of what's worth looking at is on the North bank. Pick your day and time. 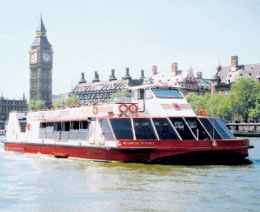 A Thames river cruise is without doubt one of the best ways to see London, weaving through the heart of the city you'll see the Cutty Sark, London's commercial hub, Canary Wharf, the Tower of London, Tower Bridge, the retired battle-cruiser - HMS Belfast; St Paul's Cathedral, Shakespeare’s Globe and the Tate Modern. You also get a close view at Millennium Footbridge, controversially constructed for the turn of the new century; and of course Westminster Abbey and Big Ben. 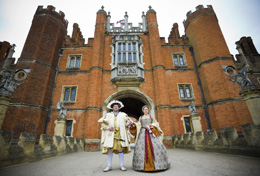 A Big Pad For A Big Man - Hampton Court Palace

The flamboyant Henry VIII is most associated with this majestic palace, which he extended and developed after acquiring it in the 1520s. Its many royal occupants have ensured the palace has fabulous furnishings, tapestries and paintings. It is set in 60 acres of formal gardens, which include The Maze, The Great Vine, The Pond Garden, The Fountain Garden, Long Water, The Mantegna Gallery and the Broad Walk. There is so much to see at Hampton Court that you shouldn't be expecting to do much else on the day.

It would be trite to call this 'an amazing maze' or 'the most famous maze in the history of the world' but that does not appear to have stopped us. It's fun – just do it.

Before Henry’s own personal obesity outbreak